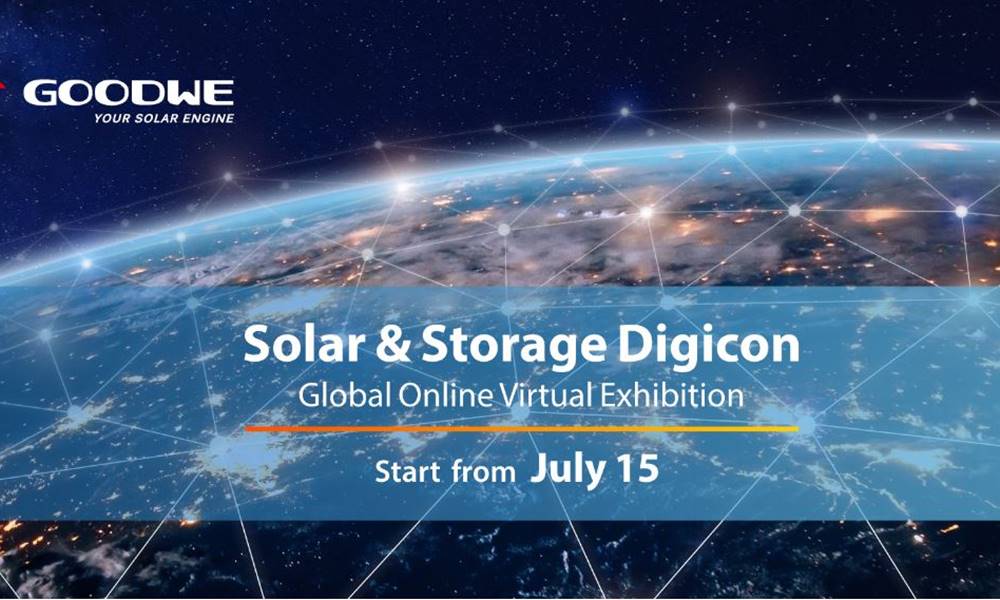 In response to the current situation that has seen unprecedented travel restrictions and cancelled/postponed events, two globally-recognized business platforms, Joint Forces for Solar and the International Battery Energy Storage Alliance – IBESA have taken the lead in supporting companies along the entire supply chain with the launch of a digital marketplace – Solar & Storage DigiCon. It is a first-of-its kind virtual environment designed for the global solar and energy storage industries and aims to connect stakeholders around the globe and around the clock to foster accelerated exchange of knowledge and information.

From July 15th onwards, GoodWe will be part of the brand new platform “Solar & Storage DigiCon” – a virtual environment where GoodWe will display its products, services, innovations, to generate new leads and proactively maintain customer engagement on a global and local scale. Particular focus is given to the connection and interaction between industry suppliers and market intermediaries, such as installers, project developers and EPC companies.

GoodWe is currently the world leader in storage inverters and has recently won the TÜV Rheinland “All Quality Matters” award for the 5th consecutive year. During Solar & Storage DigiCon, stakeholders from the solar industry will gather to gain further knowledge about GoodWe products and services, including GoodWe’s recent addition in storage and its world-acclaimed HT inverter for use on utility projects.

For further information on the platform visit: www.solarstorage-digicon.com

Trends And Technologies At The First Intersolar Innovation Day 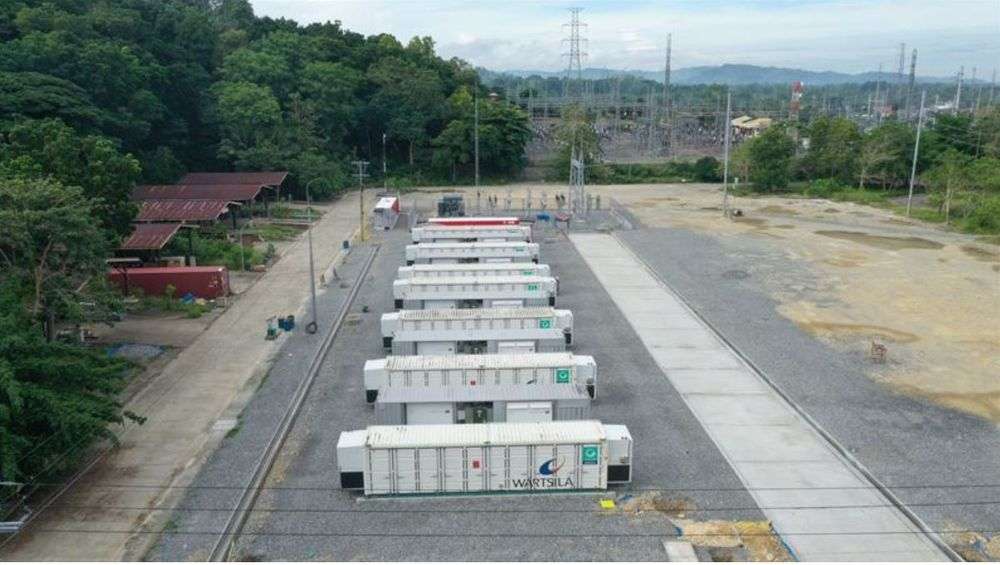 The technology group Wärtsilä has signed multiple energy storage contracts with SMC Global Power Holdings Inc. through its subsidiary, Universal Power Solutions Inc., in the Philippines during 2019-2020. The first two projects, Integrated Renewable Power Hub-Toledo and BCCPP, Limay, Bataan, have achieved final commissioning in May. The projects have a capacity of 20 MW / 20 MWh and 40 MW / 40MWh respectively, and are part of the earlier announced energy storage orders.

These are the first energy storage systems supplied by Wärtsilä to the Philippines. The projects are delivered on an engineering, procurement and construction (EPC) basis, and include Wärtsilä’s propriety software and hardware solutions. The systems comprise the company’s GridSolv Max system, a standardised energy storage solution that provides flexible and modular storage for the core hardware assets of the systems, including the batteries, a safety and fire system, and inverters, alongside the advanced GEMS Digital Energy Platform.

“Our partnership with SMC Global Power, a company with technical experience in battery energy storage systems, has enabled us to reach this stage and be ready for operation in record time. This also further demonstrates Wärtsilä’s EPC capabilities in the region, as well as our ability to operate under the challenging restrictions set by the pandemic. These projects showcase our long-term commitment to be present in the Philippines and to continue delivering optimised solutions that support the energy transition in Southeast Asia,” commented Kari Punnonen, Director, Australasia, Wärtsilä Energy.

Wärtsilä is enabling the transition towards a 100% renewable energy future by designing and building flexible systems that integrate renewable energy sources, thermal assets and energy storage. In 2018, the Association of Southeast Asian Nations (ASEAN) committed to meeting 23 percent of its primary energy needs from renewables by 2025. The region aims to leverage its abundant wind and solar resources and reduce its reliance on fossil fuels, especially as grid systems are developing and economies growing. Wärtsilä’s energy storage projects will contribute to the reliability necessary to support Southeast Asia’s transition to carbon-free resources.

Reaching this important milestone in the project execution is another endorsement of Wärtsilä’s delivery capabilities. Wärtsilä has a strong presence in Southeast Asia with a total installed capacity of over 9,000 MW, of which 2,000 MW were executed as EPC deliveries, including approximately 300 MW of contracted energy storage systems. 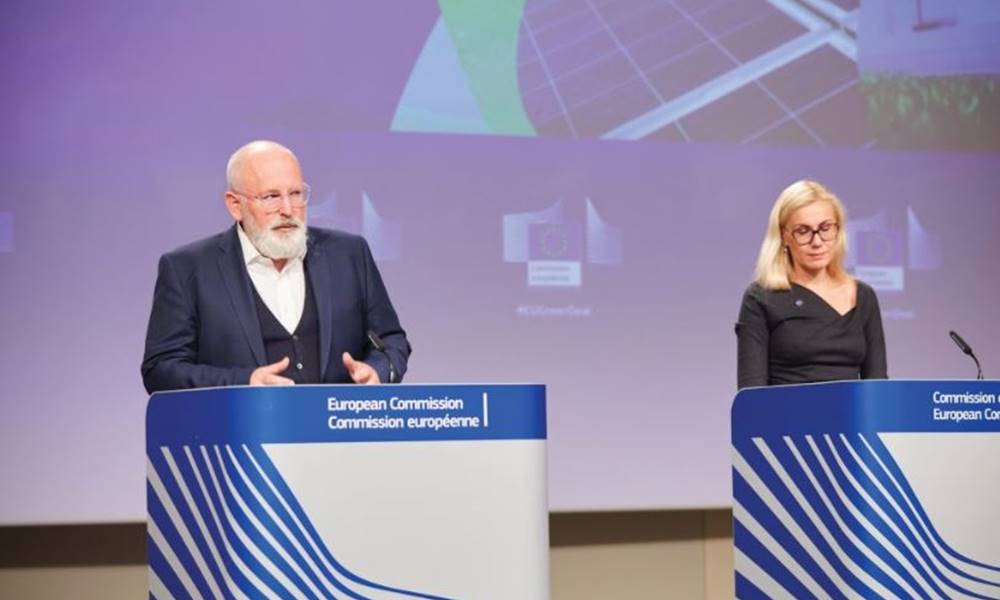 Today, the European Commission adopted two important strategies in support of the Green Deal’s energy and climate targets: the ‘EU Strategy for Energy System Integration’ and ‘EU Hydrogen Strategy’. Together, the strategies indicate the Commission’s plans for a future-proof and climate-neutral energy system, with investments aiming to stimulate a green recovery and strengthen EU leadership in clean energy technologies.

The ‘Energy System Integration’ strategy integrates key elements that are crucial for the uptake of solar power. In particular, it proposes to support the deployment of solar-based solutions in the transport, building, and heating sectors through a review of the primary energy factor and dedicated flagship initiatives, such as integrating onsite solar solutions as part of the upcoming Renovation Wave. When it comes to EV charging, solar can play a central role by increasing the efficiency and cost-competitiveness of electrification, especially when integrated into buildings (through building-integrated photovoltaics). The need to further develop electricity grid infrastructure at both the transmission and distribution level is also strongly emphasized in the strategy, which involves revising TEN-E and TEN-T regulations to be consistent with the Commission’s climate neutrality objective.

The strategy further seeks to align the taxation of energy products and electricity with EU environment and climate policies, avoiding double taxation and ensuring a revision of the State Aid framework to support cost-effective de-carbonization, working towards phasing out fossil fuel subsidies altogether.

Mercè Labordena, Senior Policy Advisor at SolarPower Europe, commented: “As the most scalable and cost-competitive clean energy technology, solar is clearly key to enhancing energy system integration, underpinning the electrification of Europe’s energy system. It is good to see plans for the further electrification of buildings, where rooftop solar has a particularly important role to play, with the potential of powering EVs with clean energy produced right above our heads. Further, our recent study with LUT University, ‘100% Renewable Europe’, shows that Europe can achieve climate neutrality before 2050 with a 100% renewable energy system, but that this must be coupled with a high rate of electrification and sectoral integration. This strategy comes at the right time, to build on technologies of the future for a green recovery, and to deliver on the ambitions of the European Green Deal.”

In parallel, the Commission adopted its ‘EU Hydrogen Strategy’, which details the necessary measures to scale up the production of clean hydrogen in the context of an integrated energy system. The strategy acknowledges the central role of hydrogen produced through electrolysis using renewable electricity, based on solar and wind, to support the complete de-carbonization of hard-to-abate sectors. Renewable-based hydrogen should be prioritised and developed into a cost-competitive solution for Europe’s end-users, by producing 1 million tonnes of renewable hydrogen by 2024 (with 6 GW of renewable hydrogen electrolysers installed in the EU) and 10 million tones by 2030 (with 40 GW of electrolizers).

The strategy supports renewable hydrogen through incentivizing the roll-out of dedicated giga watt-scale renewable hydrogen factories, providing quotas for renewable hydrogen in certain end-use sectors, and proposing a European-wide criterion for the certification of renewable hydrogen based notably on GHG emission savings. To deliver this strategy, the Commission is launching the ‘European Clean Hydrogen Alliance’, to develop a concrete pipeline of projects.

Aurélie Beauvais, Policy Director and Interim CEO of SolarPower Europe, said: “Today, the European Commission made an important step towards the ambition of the Green Deal, by recognizing renewable hydrogen, powered by solar and wind-based electricity, as the most promising way to decarbonize hard-to-abate sectors. This is a smart and forward-looking move, as renewables today are the most affordable, clean, and job-intensive technologies that can support a green recovery at a crucial time for Europe. With the Commission’s Hydrogen Strategy, the European renewables sector was affirmed as a core pillar of the EU’s energy transition, supporting the full-de-carbonization of the European economy even beyond electricity.”

The Commission further announced that it will address the use of hydrogen in the transport sector in its upcoming ‘Sustainable and Smart Mobility Strategy’, scheduled to be presented by the end of the year.

Trends And Technologies At The First Intersolar Innovation Day

The global innovation hub The smarter E is once again concentrating its efforts on sharing information on energy industry topics and providing a networking opportunity for global industry players – now with a number of additional digital formats. The first ever Intersolar Innovation Day will take place on July 15 and 16, 2020. This two-day online event is geared toward any and all innovation and solar energy enthusiasts. Attendees of the first Intersolar Innovation Day 2020 can look forward to learning about the latest technologies in the global solar industry, hearing from top-level speakers and viewing product presentations. Plus, they will be able to take advantage of networking opportunities with company representatives and solar experts.

In addition to the many trends in solar cells, modules and systems, the first Intersolar Innovation Day will shine a spotlight on inverters. Around 30 Intersolar exhibitors of note will show what the industry’s broad spectrum has to offer. They will present their innovative products and solutions for the integration of renewable energies to an international audience as well as the attendees of their virtual booths at the event’s expo area.

Michael Schmela, Executive Advisor, Head of Market Intelligence and Member of the Leadership Team at SolarPower Europe will open the first day of the online event with his keynote speech “Innovating the Solar Decade”. The second day will commence with the keynote speech “The Smart Combination of System Solutions” delivered by David Wedepohl, Managing Director International Affairs at the German Solar Association (BSW-Solar). The keynote speeches will be followed by the presentations from the participating companies in two parallel sessions per day as well as by an interactive Business Lunch Expert Talk.

For further information, or to register free of charge, please visit The smarter E website. The Intersolar Innovation Day will be held in English.